The sacred in Lomellina

Christianity spread tentatively and covertly from the 3rd century onwards, but it was not until the edict on the freedom of worship, signed by Emperor Constantine in 313, that the earliest followers of Christ became established between the Po, Ticino and Sesia. Illustrious saints such as Eusebius, Bishop of Vercelli, who died in 370, his successor Gaudentius, Martin of Tours, Augustine of Hippo and Ambrose from Milan came to preach here. 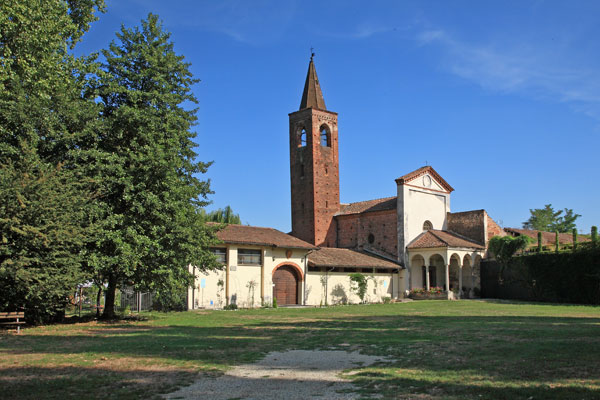 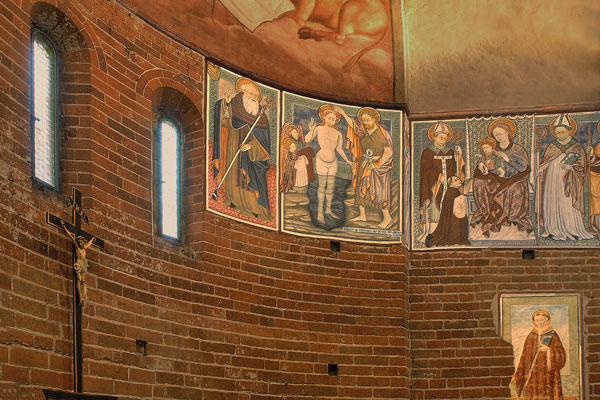 It was also in the 4th and 5th centuries that the first hierarchical ecclesiastical structures were established: bishoprics were set up in Roman municipalities; churches known as mother churches (matrici) or parish churches (pievi) were founded in the rural administrative districts known as pagi or corti; and chapels or parish churches (parocchie) in the vici, or scattered villages. Lomello and Cozzo were also rudimentary bishoprics, the former evangelised by Pavia and the latter by Vercelli and Novara, while the area along the Po was influenced by the diocese of Tortona. The presence of pievi (Albignola, Cairo and Velezzo), the first Christian centres often built on the site of pre-existing pagan temples, is still notable today. No less rare is the presence of a baptistery, where baptism by immersion was celebrated: those that survive today are found in Lomello (San Giovanni ad Fontes, the date of which is debated by historians, but ranges somewhere between the 5th and 8th centuries) and Velezzo, rebuilt between the 9th and 10th centuries on older foundations, perhaps dating back to the 5th century. A baptistery was also found in Pieve del Cairo, but was later destroyed by the recurrent flooding of the Po. It was the only example in Lomellina to have a square plan, as the one in Lomello is octagonal and the one in Velezzo circular. 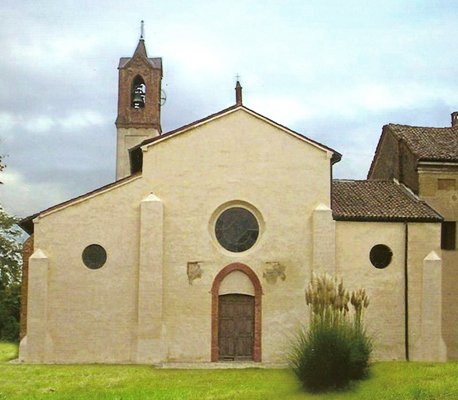 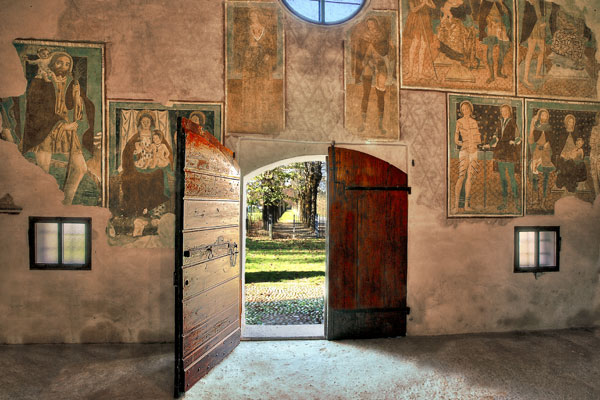 Interior of the church of San Rocco in Sant’Angelo 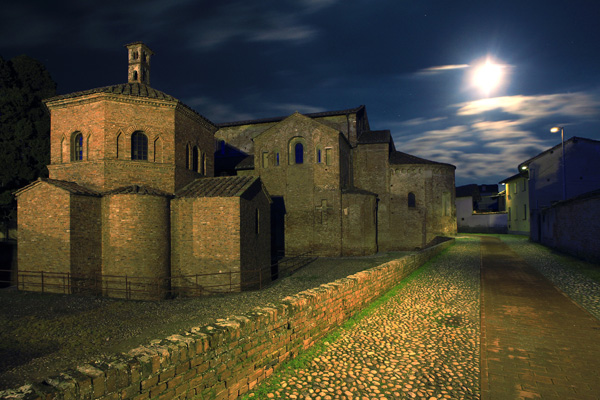 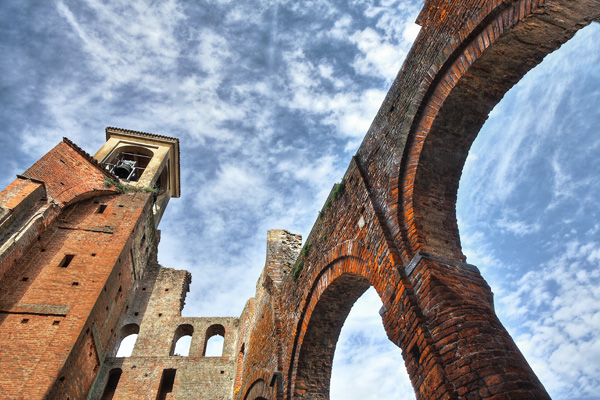 The development of monasticism, driven by the figures such as Benedict of Norcia and Columbanus of Bobbio, played an important role in the religious, social and economic history of Lomellina. In the early medieval period, the recovery of marginal and uncultivated areas through the clearing of forests, the reclamation of the vast marshy areas of the plains, the introduction of new agricultural techniques and the improvement of established techniques were all activities linked to the very organisation of monasteries. During the ninth century, the first communities connected to the Abbey of San Pietro di Precipiano near Tortona came into being: the church and priory of San Paolo in Sartirana, San Pietro in Gambarana, the chapel of San Colombano along the Sesia, between the deserted villages of Meleto and Langosco, and Sant’Agata in Lomello. Around the year 1000, there were about thirty pievi, priories and rectories of rural churches entrusted to the care of the monks. Some of the most important examples were the abbey of San Pietro in Breme – a daughter house of the Benedictine abbey of Novalesa and centre of the powerful Order of the Bremetensi – and the abbeys of Sant’Albino and Santa Croce in Mortara, run by the Augustinian monks of Tours and the Order of the Mortariensi (Canons Regular of St Augustine) respectively. The monastery of San Pietro in Lomello and the monastic granges of San Siro in Frascarolo and Santa Maria di Bagnolo near Langosco were all dependent on Breme. Santa Maria di Bagnolo later became the Po Valley outpost of the Benedictine abbey of San Michele alle Chiuse, near Susa. Santa Croce controlled the priories of Santa Maria in Zeme, San Terenziano in Nicorvo and Santa Maria in Castello d’Agogna, where the Mortariensi also presided over the church of San Martino “in Castel Barona”. Other Mortariensi sites were the monastery of Santa Maria “de strada”, between Ceretto and Mortara, San Pietro in Ceretto, the church and “cella” of Sant’Agostino in Cava Manara and the churches of San Cassiano and Santi Siro e Gentiniano in Mortara. One of the oldest monastic communities in Lomellina is the monastery of San Marziano in the Tortona area, on which the parish church of the same name in Mede, the small corti of Parzano and Goido, and the “celle” of Castellaro and Tortorolo, as well as Sant’Innocenzo in Cairo, were dependent. 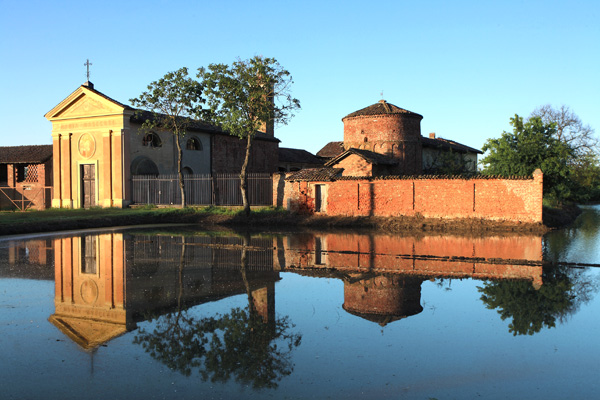 Parish church and baptistery of Velezzo 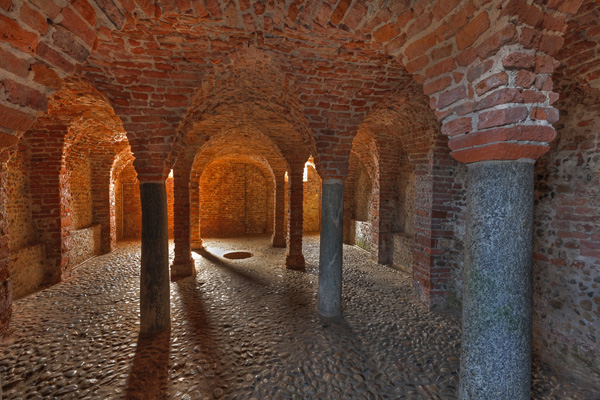 Crypt of the Abbey of San Pietro in Breme

In 1170, the Cluniac abbeys of San Valeriano di Robbio, San Maiolo di Gambolò and San Vittorino di Cozzo passed to the monks of Vallombrosa. In the 13th century, the abbeys of Santa Maria di Acqualunga in Frascarolo, San Maurizio in Monticello (near San Giorgio) and San Pietro di Erbamara in Cergnago were ceded to the abbey of Citeaux, the cradle of the Cistercian Order. 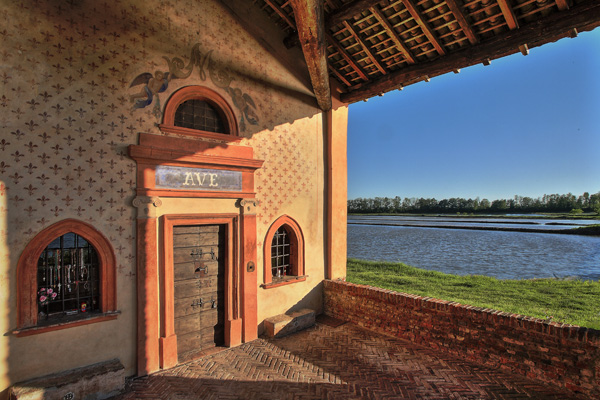 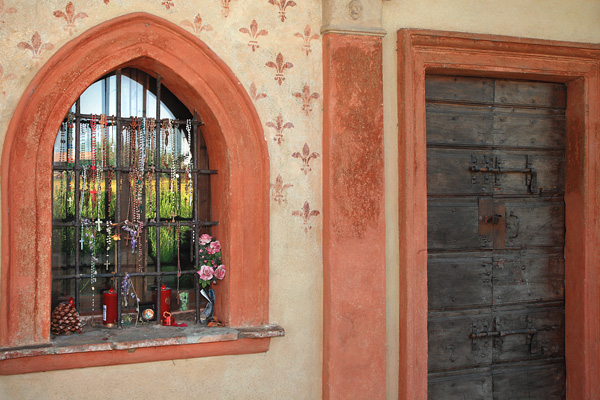 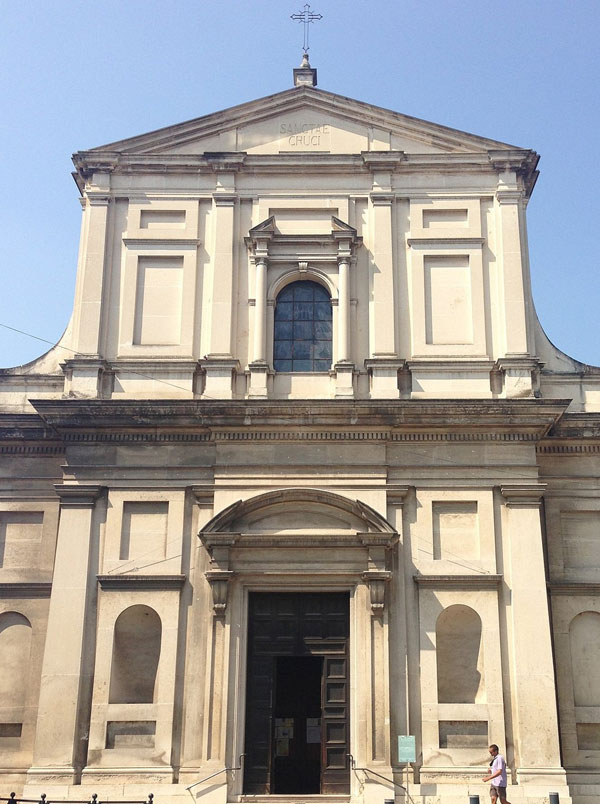 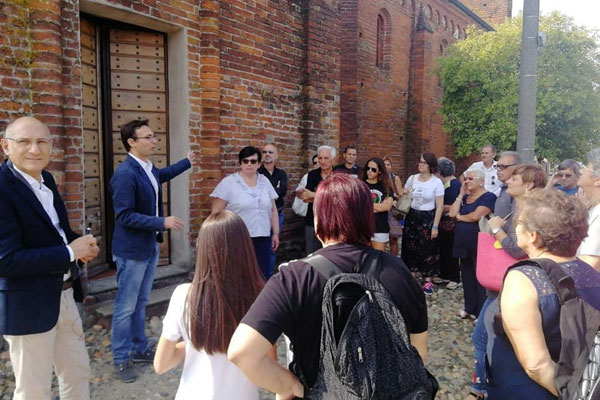 Tourists at the Abbey of San Valeriano – Robbio