Two battles were fought in Lomellina before the advent of Christ. In late November 218, Hannibal’s Carthaginian cavalry defeated the Roman cavalry of Consul Publius Cornelius Scipio in an area defined by Livy as “apud Ticinum”, i.e. near the River Ticino. On 30 July 101, the legions under the command of consuls Gaius Mario and Quinto Lutazio Càtulo annihilated the Cimbri people in the battle of the Campi Raudii, in the plain between Robbio and Vercelli.

In November 590, the Lombard queen Theodolinda married Agilulfo, Duke of Turin, who was crowned king on 5 May 591. According to the historian Paolo Diacono, the wedding was held in Lomello, in the basilica of Santa Maria Maggiore. In popular tradition, the basilica is the “church of the devil”, as the day before the wedding, Satan destroyed the building and rebuilt it in a single night of frenzied work, but left it deliberately incomplete. Satan made sure that the walls were not parallel; moreover, the shafts, capitals, arch spans and heights of the colonnades were of different shapes and sizes.

On 12 October 773 in Mortara, in the countryside around the Abbey of Sant’Albino, the Frankish king Charles – the future Charles the Great or Charlemagne – defeated the Lombard king Desiderius in a pitched battle. This is the origin of the evocative legend of the Frankish paladins Amico and Amelio, who died in the battle: their remains, interred in two different places, were found under the altar of the abbey.

A document from 913 signed by Berengar I, King of Italy, mentions for the first time a “situm de Comitatu Laumellino”, i.e. a place in the Committee (county) of Lomellina. A century later, in a diploma of 1019, Henry II, Holy Roman Emperor, wrote: “res etiam iuris ipsius monasterii de ipsa civitate [Pavia] et in Laumellina”.

Around the year 1000, the family of the Counts of Lomello, related to the Counts of the Sacred Palace of Pavia, began to gain prestige. In 1164, the family dispersed, settling in various towns in Lomellina: the most influential branch was the Langosco. The powerful Genoese branch, founded by Gandolfo da Lomello (known as “Lomellino” on account of his origins), is also worthy of note. In the 16th to 18th centuries, several members became Doges of Genoa, the most famous being Giambattista Lomellini, who supported Admiral Andrea Doria against French domination.

In 1492, in Vigevano, the Sforza family started building the Piazza Ducale and the extension of the castle, which would become one of the largest fortified complexes in Europe. Ludovico Maria “il Moro” Sforza, then regent of the duchy of Milan, commissioned the construction of the square as an antechamber to the neighbouring castle, and work was completed in 1494. It measures 134 metres long and 48 metres wide and is built up on three sides: the fourth is occupied by the Cathedral of St Ambrose, the bishopric.

On 11 April 1512, Easter Day, the Franco-Germans defeated the army of the Holy League, organised by Pope Julius II, in Ravenna. Cardinal Giovanni de’ Medici, papal legate and future Pope Leo X, was taken prisoner by the French. On Sunday 6 June, as he was crossing the Po at Pieve del Cairo, he was freed by a group of commoners. Four years later, with the papal bull of 20 August, Leo X granted Pieve del Cairo a double perpetual jubilee.

The War of the Montferrat Succession ended with the Peace of Pavia, signed on 9 October 1617. This is the setting for the legend of “bella Pierina”, a 17-year-old girl from Candia Lomellina who was burnt at the stake on charges of high treason for revealing the location of the Spanish troops to the Franco-Savoyards.

On 8 November 1703, Victor Amadeus II, Duke of Savoy, started negotiations with Austria, pledging Lomellina (excluding Vigevanasco and Siccomario), Alessandria, Valenza and Val Sesia. On 18 March 1707, the communities and feudal lords of Lomellina swore allegiance to the Duke of Savoy, but the Municipality of Pavia vehemently protested on 9 April by presenting a document to the Senate of Milan and, among others, to the Duke of Savoy. In 1713, Victor Amadeus II became King of Sicily, which was later exchanged for Sardinia.

On 18 March 1848, a few hours after the start of the insurrection that would go down in history as the Five Days of Milan, a committee was set up in Mortara to organise volunteers from Lomellina, who were determined to fight the Austrians across the Ticino, the state border. Following the the Salasco armistice, on 21 March 1849, the Piedmontese clashed with the Austrians at Sforzesca in Vigevano and in Mortara. The First Italian War of Independence ended two days later with the Piedmontese defeat at Bicocca in Novara.

Lomellina is described by local scholars as “little Mesopotamia”. This is because the alluvial plain to the south of the line of fontanili and springs in Novara is bounded by the rivers Ticino to the east and Sesia to the west, together with the Po, which flows along a section of the western border and then longitudinally towards Piacenza. From an administrative point of view, Lomellina is part of the province of Pavia in Lombardy, but its inclusion in the Piedmontese provinces of Alessandria, Vercelli and Novara is clearly visible on maps.
The earliest evidence for human habitation can be traced back as far as the 13th century BC, with settlements on the alluvial terraces near the numerous watercourses. In the following centuries, the area was populated by tribes of Ligurian descent and, in particular, by the Levi tribe. The latter founded the mansio of Lomello (Laumellum), the first centre of territorial aggregation, from which the toponym Lomellina is derived.

Around the 6th century BC, the Levi were joined by Celtic populations from beyond the Alps; however, the real turning point came at the end of the 3rd century with the arrival of the Roman legions on the Po. In 222 BC, at Clastidium (Casteggio), the consuls Claudius Marcellus and Cornelius Scipio defeated the Celtic warriors crossing the Po, beginning the process of Romanisation of Cisalpine Gaul. A further milestone was the Lex Julia, a law passed in 90 BC, which extended Roman citizenship to people of Ligurian and Celtic origin. The economic development of Lomellina was boosted by the extension of the communication network. In the 1st century AD, the Romans improved a pre-existing route that ran through the dense forests then covering the ridges in Lomellina: from Ticinum (Pavia), the road to Gaul passed through Duriae (Dorno), Laumellum (Lomello) and Cuttiae (Cozzo). 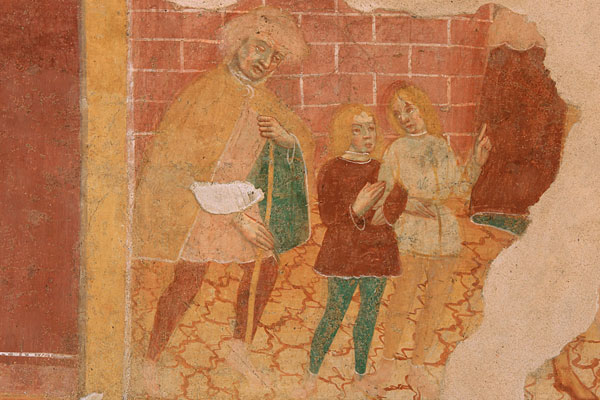 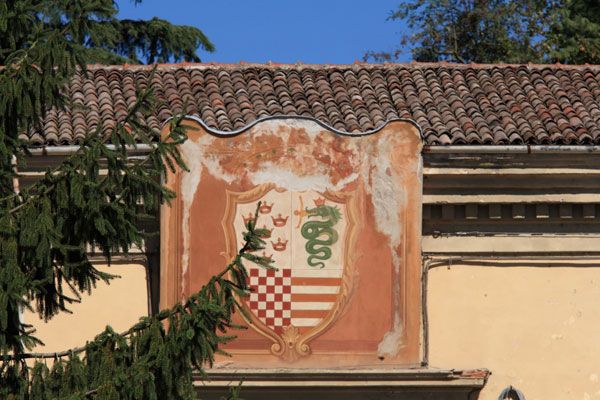 After the fall of the Western Roman Empire (476), Lomellina was occupied first by the Goths and then by the Lombards, who established their capital in Pavia. In the late Middle Ages, Lomello, the ancient Roman municipium on the banks of the Agogna, took on an important role, and its relationship with Pavia was contradictory and often conflictual. After the victory of Charlemagne’s Franks over King Desiderius’s Lombards in 774, Lomello became the capital of a committee (county) that joined the powerful March of Ivrea, extending its authority to parts of the areas around Voghera, Biella, Alba, Casale Monferrato and Alessandria, from Ticineto and Frassineto to Sale and Bassignana.
At the turn of the 11th century, political and administrative conflict broke out between Lomellina and the city of Pavia. In 1024, Pavia established a free city, destroying the Holy Palace and prompting Count Otto II to strengthen his position in the original county of Lomello.

Pavia gained control of the three areas that still make up the province today (Lomellina, Oltre Po and the Lands between Pavia, Milan and Lodi). In the 14th century, it regained its lost prestige under the Visconti family, who transferred their court there from Milan in 1365. Lomellina was conferred to the county of Pavia, later elevated to a principality. Another period of glory was the Sforza period. In the late 15th century, Duke Ludovico Maria, known as “il Moro” (“the Moor”), put Lomellina on the map by inviting Leonardo da Vinci and Donato Bramante, among others, to Vigevano. The territorial unity was ruptured in 1532, when Francesco II Sforza, Duke of Milan, established the Vigevanasco, an autonomous province that for more than two centuries would bring together part of Lomellina, including Vigevano, Gambolò, Cilavegna and Robbio. For about a century and a half, Lomellina was part of the principality of Pavia within the Spanish-controlled Duchy of Milan, but everything changed with the War of the Spanish Succession.
Under the treaty of 8 November 1703, Victor Amadeus II, Duke of Savoy, would receive the lands “quae dicitur Lumellina” in the event of victory. After the Peace of Utrecht in 1713, central and southern Lomellina would be united in the newly created province, with Mortara as its capital. In 1743, with the Treaty of Worms, Turin also annexed Vigevanasco, which was made a new province, and Siccomario, at the far end of Lomellina on the outskirts of Pavia. After the brief Napoleonic period, the Provinces of Lomellina and Vigevano were reunited in 1818, with Mortara as their capital, and were included in the Division (an administrative entity similar to the current Region) of Novara. In 1859, after the victorious Second Italian War of Independence, the Rattazzi decree established the reunification of Lomellina and Oltrepò Pavese, which were formerly Piedmontese, with Pavia, which had been seized from Austria. The new province of Pavia was created, in which Lomellina formed a district of the same name, with Mortara as its capital and seat of the sub-prefecture, trial court, land registry and finance offices. The last shred of administrative autonomy came to an end in 1927 with the abolition of the districts.